As April is National Distracted Driving Awareness Month, AAA Texas is reminding drivers: “Don’t Drive Intoxicated – Don’t Drive Intexticated”. Drivers reportedly caused 95,639 distracted driving crashes on Texas roadways in 2018, according to new numbers released to AAA Texas by the Texas Department of Transportation. While the overall year-to-year results improved, statewide, the statistics also demonstrate drivers across Texas have a long road ahead before the issue is solved (see chart).

“Don’t Drive Intoxicated – Don’t Drive Intexticated” is the theme of AAA’s multimedia traffic safety education campaign created to make distracted driving socially unacceptable. New public service announcements (PSAs), which began airing in Dallas/Fort Worth and Houston this week, are designed to help audiences understand that the consequences of using a smartphone while driving are the same as drinking and driving.  The campaign targets drivers who would never consider drinking alcohol behind the wheel, and yet, regularly engage with mobile devices that dangerously take their eyes, hands and minds off the road.

Research from the AAA Foundation for Traffic Safety found that potentially unsafe mental distractions can persist for as long as 27 seconds after drivers use voice-based technology to dial, change music or send a text message. At 25 mph, drivers travel the length of nearly three football fields during this time. AAA Texas urges drivers to put down their phone and avoid distractions when behind the wheel, especially now during April’s Distracted Driving Awareness Month.

“Most drivers believe that if their eyes are on the road and their hands are on the wheel, then they are focused on the drive,” said Daniel Armbruster, AAA Texas spokesperson. “But research proves that there are hidden dangers when using a cell phone or in-vehicle technology. Mental distractions last longer than you think and can cause a dangerous crash.”

Additional research also shows drivers talking on a cellphone are up to four times as likely to crash while those who text are up to eight times as likely to be involved in a crash. Despite the risk, drivers increasingly report using technology behind the wheel. Nearly half (49 percent) of drivers report recently talking on a hand-held phone while driving and nearly 35 percent have sent a text or email. This behavior is in contradiction to the fact that nearly 58 percent of drivers say talking on a cellphone behind the wheel is a very serious threat to their personal safety, while 78 percent believe that texting is a significant danger.

“We have created a do as I say, not as I do culture on our roadways. Drivers understand the risk, they just don’t think they are the problem,” said Armbruster. “With 394 people killed on Texas roadways in distracted driving crashes last year, it is time for drivers to be accountable. We can save lives”

AAA Texas is committed to helping drivers curb the urge to engage in distracting behaviors behind the wheel. Any task that requires taking your eyes or attention off-the-road and hands off-the-wheel can present a dangerous risk on the roadway. That includes changing the radio, programming navigation or even enjoying a sandwich. In order to avoid distraction, AAA Texas recommends:

To learn more about the AAA Foundation’s research on how vehicle manufacturer’s in-vehicle technology, including Apple CarPlay and Google’s Android Auto systems, can create dangerous distractions for drivers behind the wheel, visit AAA.com/distraction.

About AAA Foundation for Traffic Safety: Established in 1947 by AAA, the AAA Foundation for Traffic Safety is a not-for-profit, publicly funded, 501(c)(3) charitable research and educational organization. The AAA Foundation’s mission is to prevent traffic deaths and injuries by conducting research into their causes and by educating the public about strategies to prevent crashes and reduce injuries when they do occur. This research is used to develop educational materials for drivers, pedestrians, bicyclists and other road users. Visit www.AAAFoundation.org.

About AAA: AAA provides more than 59 million members with automotive, travel, insurance and financial services through its federation of 34 motor clubs and nearly 1,100 branch offices across North America. Since 1902, the not-for-profit, fully tax-paying AAA has been a leader and advocate for safe mobility. Drivers can request roadside assistance, identify nearby gas prices, locate discounts, book a hotel or map a route via the AAA Mobile app. AAA Texas branch offices throughout the state can be found by visiting www.AAA.com. Follow AAA Texas on Twitter: @AAATexas and Facebook: www.facebook.com/AAATexas. Find additional news from AAA Texas in our online newsroom at http://tx-aaa.iprsoftware.com/.

The driver takes his eyes off the road to move papers to the overhead visor of the vehicle. When he looks at the road again, he realizes he is about to hit the vehicle in front of him and applies his brakes too late. He swerves to miss the vehicle and ends up in the median. (Location: n/a)

The driver is holding his phone while talking through the speakerphone. Cellphone use, whether handheld or hands-free, puts everyone in danger – not just the driver. This driver is lucky, particularly since he is driving with only one hand on the wheel and, sometimes, no hands. (Location: California)

*Holding a phone while driving is illegal for all drivers in 16 states and the District of Columbia.

The driver is talking on a hands-free cellphone when she fails to properly stop for a stop sign before making a right turn. Whether hands-free or handheld– using a cellphone behind the wheel can cause distractions. From not having two hands on the wheel to rolling through a stop sign, distractions can lead to crashes. (Location: California) 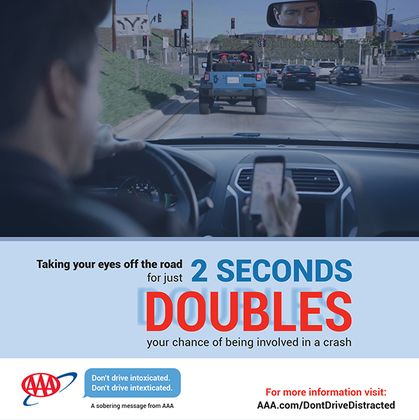