The statewide gas price average in Texas is $2.93 for a gallon of regular unleaded fuel, according to the AAA Texas Weekend Gas Watch. That price is six cents more than on this day last week and is $1.07 more per gallon compared to this day last year. Of the major metropolitan areas surveyed in Texas, drivers in El Paso are paying the most on average at $3.15 per gallon while drivers in Lubbock are paying the least at $2.85 per gallon. The national average price for a gallon of regular unleaded is $3.30, which is six cents more when compared to this day last week and $1.12 more than the price per gallon at this same time last year.

The statewide gas price average is at its highest price point in seven years. On October 19, 2014 the average for regular unleaded was also $2.93 per gallon. While Texas gas prices are much higher than they were in 2020 when fewer people were traveling and driving, they’re nowhere near the record high set back in July 2008, which was $3.98 per gallon. The key driver for this recent rise in the price of gas is crude oil, which typically accounts for between 50% and 60% of the price at the pump. Also Organization of Petroleum Exporting Countries (OPEC) and its oil-producing allies recently decided to not increase production further, which has only exacerbated the upward momentum for crude oil prices.

“Texans are paying the most for retail gasoline since 2014,” said AAA Texas spokesperson Daniel Armbruster. “With more people traveling and returning to the office, demand for fuel is on the rise. Factor in surging crude oil prices due to OPEC+ forgoing further production increases and we’re seeing a trend that we’re not used to seeing in October.”

While drivers in Texas are experiencing sticker shock at the pump, they’re still paying the cheapest prices in the country. According to gasprices.aaa.com, Texas ranks first for lowest statewide gas price average in the U.S.

To help members and non-members identify quality auto repair shops that can assist in the maintenance and repair of their vehicles, AAA offers the Approved Auto Repair program as a free public service. AAA-approved repair facilities meet and maintain high professional standards for training, equipment, cleanliness and customer service. Motorists can look for the Approved Auto Repair sign at local auto repair facilities, or search for a nearby AAA-approved shop online at AAA.com/Repair. AAA Texas branch offices throughout the state can be found by visiting www.AAA.com. Follow AAA Texas on Twitter: @AAATexas and Facebook: www.facebook.com/AAATexas. 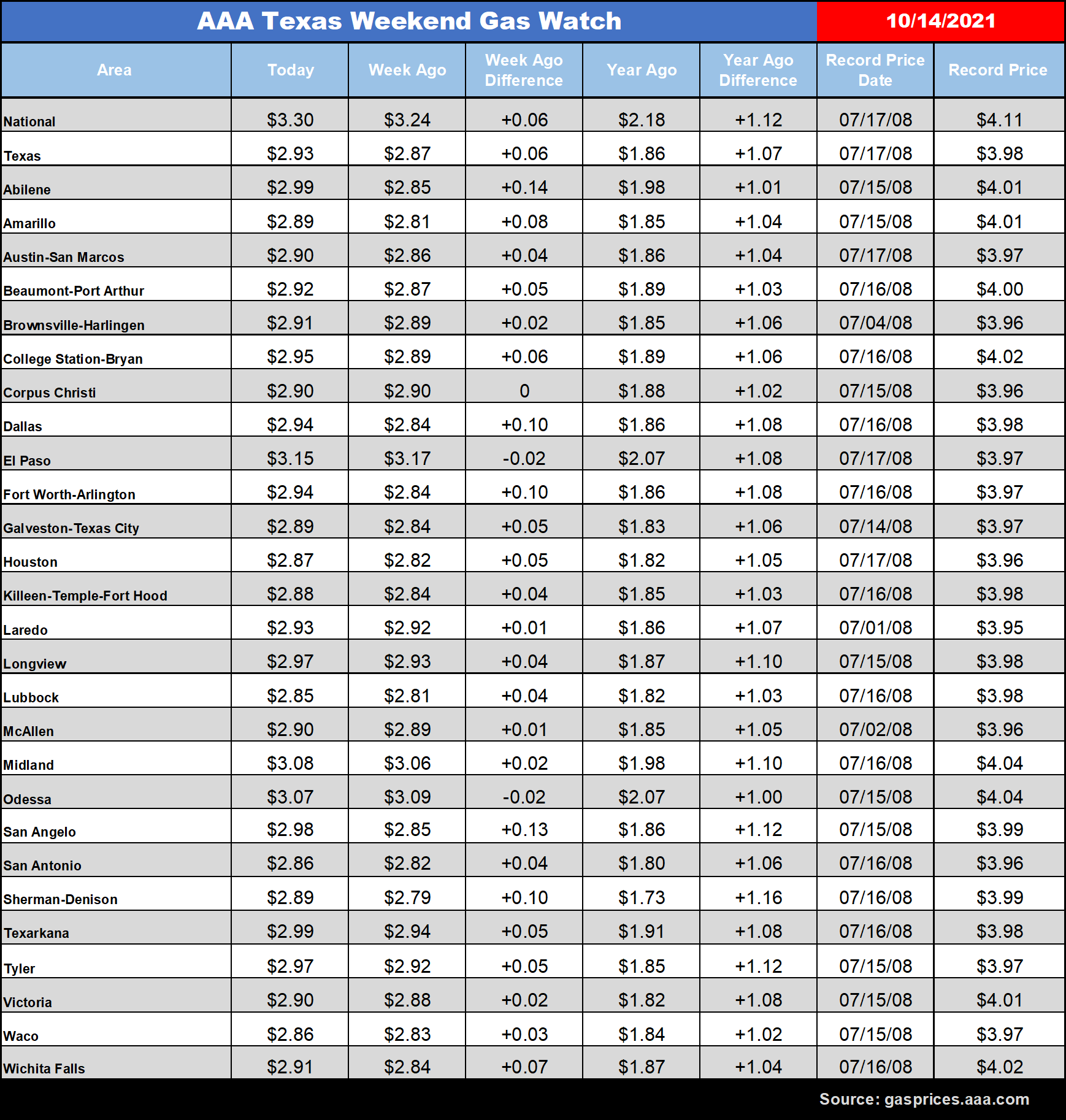